How to Show Empathy and Create Relatable Characters

While there are many serious examples of stories affecting human rights and other causes, I’m going to start my point with something simpler.

Not far from where I live is a little red lighthouse. Here it is: 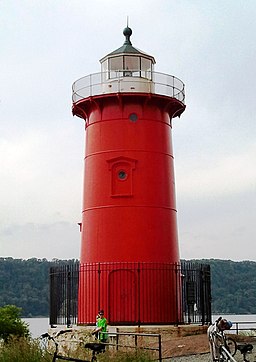 It’s cute, right? It’s just a lighthouse. There’s nothing special about it—except that the George Washington Bridge was built almost on top of it not long after it was completed, rendering it redundant.

For completely logical reasons, the Coast Guard decommissioned it and made plans to sell it or tear it down.

Ah, but that’s not the end of the story!

In 1942, an author named Hildegarde H. Swift wrote an adorable children’s book called The Little Red Lighthouse and the Great Gray Bridge that made the lighthouse into a character. This lighthouse did its job with joy, leading ships to safety in the worst of fogs. But then *gasp* the bridge was built overhead with enormous lights, and the lighthouse lost its purpose.

It struggled with feeling useless and unwanted, until one day, an enormous storm came, and the boats could not see the lights on the bridge. The little red lighthouse rediscovered its purpose as it once again led people safely through the storm, and came to the realization that though it was small, it still had a place in this world.

It’s a great story, and it changed that lighthouse’s fate. When the Coast Guard tried to auction it off, the locals who’d grown up reading that book made such an outcry that instead of being sold, the little red lighthouse was added to the National Register of Historic Places.

I don’t think Ms. Swift intended that outcome when she wrote the story, but it still had that effect because it was relatable. Behold the power of empathy!